Welcome to the age of transparency!

Invest in trust with our specific product offerings

Invest in trust with our specific product offerings

For quality, product or CSR managers 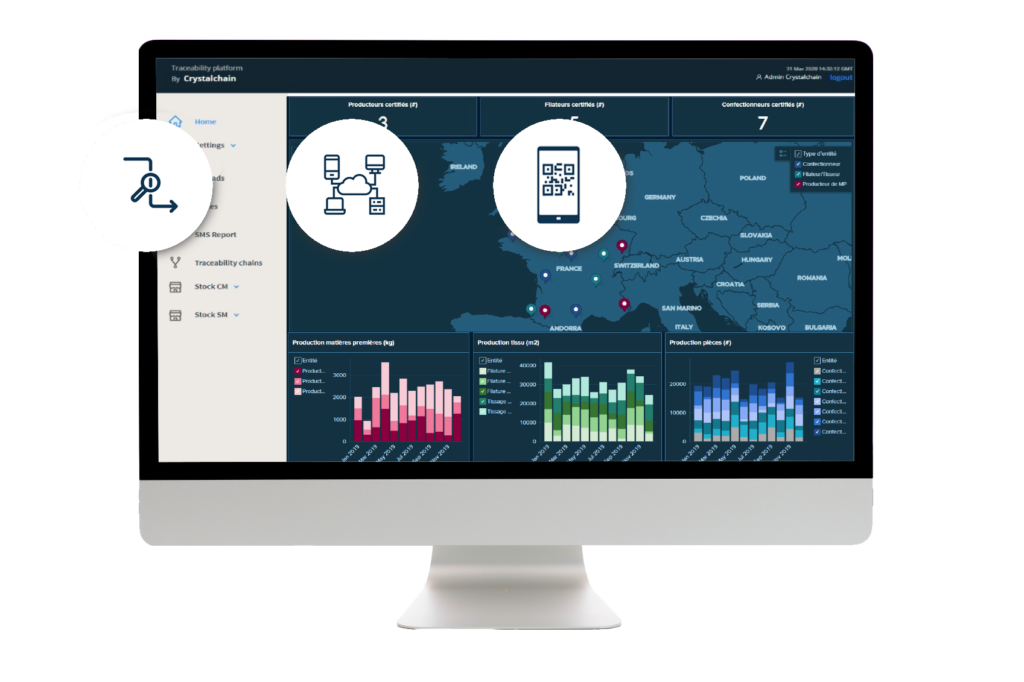 For quality, product or CSR managers

You're in good company

You're in good company

We have chaired the French commission of the ISO Blockchain Technical Committee since 2016. The key question raised by the blockchain is that of trust. Better understanding between the players in a chain of trust is what is made possible by the choice of a common vocabulary and usage rules through standardization.

The Blockchain standardization committee brings together the actors concerned, who define by consensus among the participants, the priorities to be given according to their specific needs and interests. Currently, the parties have defined the following priorities :

– terminology: defining what is meant by blockchain (in technical, legal terms), agreeing on the necessary vocabulary, taxonomy.

– architecture/modeling: conceptualize the architecture of a blockchain development starting from use cases, distinguish the network/service layers, allow the definition of a functional model between actors and interfaces according to information exchanges, avoid technology fragmentation, verify that the model allows all existing representations.

The blockchain standardization committee covers the same field of activity as the ISO/TC 307 Blockchain and electronic distributed ledger technologies.

“In 2016, ISO launched a project to standardize the blockchain. The objective is to help develop this technology by providing the necessary confidence, without hindering technical innovation. France is one of the most active countries among the 59 participating countries. »

Sylvain Cariou, CEO of Crystalchain and Chairman of the French commission of the ISO blockchain technical committee.

We use cookies on our website to give you the most relevant experience by remembering your preferences and repeat visits. By clicking “Accept”, you consent to the use of ALL the cookies.
Cookie settingsACCEPT
Manage consent

This website uses cookies to improve your experience while you navigate through the website. Out of these, the cookies that are categorized as necessary are stored on your browser as they are essential for the working of basic functionalities of the website. We also use third-party cookies that help us analyze and understand how you use this website. These cookies will be stored in your browser only with your consent. You also have the option to opt-out of these cookies. But opting out of some of these cookies may affect your browsing experience.
Necessary Always Enabled
Necessary cookies are absolutely essential for the website to function properly. This category only includes cookies that ensures basic functionalities and security features of the website. These cookies do not store any personal information.
Non-necessary
Any cookies that may not be particularly necessary for the website to function and is used specifically to collect user personal data via analytics, ads, other embedded contents are termed as non-necessary cookies. It is mandatory to procure user consent prior to running these cookies on your website.
SAVE & ACCEPT